WHAT IS THE BEST REPLACEMENT CYCLE FOR BUSINESS COMPUTERS?

Is that 5-year old computer good to go for another year? Do you have laptops that seem to spend more time in the shop than they do in service?

Figuring out a good replacement cycle for business computers can be tricky. Business owners want to make sure they’re getting their money’s worth from a device, yet they want to replace it before it starts costing them more in downtime, productivity, and repairs.

The devices that staff use are one of your most important business technology considerations, because they have a direct impact on productivity and cybersecurity.

It’s important to know what the “sweet spot” is for computer replacement cycles, so you don’t end up with major issues because you waited too long to upgrade hardware.

A standard business replacement cycle for computers is 3-5 years. But waiting until the 5-year mark can bring a lot of additional costs according to a few different lifecycle studies.

The optimum replacement cycle is once a computer is 3-years old and before it reaches the 4-year old mark. Here is the data to back up why. (Sources include a Microsoft study and Intel study.)

According to a study released by Microsoft, the optimal age of PCs is no more than four years old. It was found that once computers got beyond that age, they started to have twice as many booting problems and battery issues. Disk drive crashes causing data loss also began to be an issue.

The study estimated that holding onto computers too long costs a company an average of $2,736 per year per device. It also noted that the total cost of owning a PC older than four years was enough to replace it with two newer computers.

In the study by Intel, the total cost of ownership curve based upon PC lifecycle and three cost factors takes a dramatic upward turn between years three and four of a computer’s usable life.

Cost factors that the study looked at included:

Maintenance costs rose considerably the older a computer became, as you can see in the image below from the study. 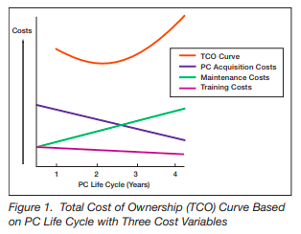 OLDER COMPUTERS HAVE TWICE THE DOWNTIME

Between one to three years, downtime remained pretty consistent, but shot up in year four.

Just one hour of downtime can cost a small business as much as $10,000.

Another cost factor shown in the Intel study was related to tech support call frequency and length.

Computers younger than 3-years old had half the number of tech support calls than computers that were 4+-years old.

Just one security breach can cause long-term issues for a small business, and many never recover from them.

Computers that were older than four years were found to have 3x as many security incidents than computers younger than three years.

One of the biggest reasons that older computers are more susceptible to security breaches is because they often reach a point where a specific type of software can’t be updated because the system won’t support it. This leaves a large vulnerability that can be exploited by a hacker.

One more area of risk with an older computer is data loss. Older computers are more apt to have hard drive crashes, which can lead to loss of all data contained on the drive if it hasn’t been backed up properly.

The Intel study found that the data loss rate for computers older than four years was 3x that of computers less than three years old.

The older a computer gets, the more it starts to slow down, and this can cause employee productivity loss.

If a slow computer causes an employee to take just 45 minutes longer to get their work done each day, that adds up to a loss of 3.75 hours per week. If an employee makes $20 per hour, that’s a loss of about $3,900 per year, significantly more than the price of a new computer.

FIND THE BEST UPGRADE OPTIONS WITH HELP FROM UNBOUND DIGITAL

Unbound Digital can help your Tennessee business find the best and most cost-effective equipment upgrade options to ensure you’re not losing money on older computers.